At 0500 hours, I woke up, took a quick shower. I had a long drive ahead. The inn did not offer any breakfast option so I settle for a biscuit and bottled water. I thought of just grabbing a breakfast along the road – Butuan City probably.

At 0610 hours, I was on the road. It was still raining. I read that this is due to a low pressure area (LPA) in Butuan City. Just my luck. The road is wet so I had to limit my speed to 80kph.

After 2 hours, I reached Bayugan City. I already drove past Butuan City. Getting a bit uncomfortable driving, I opted to grab a proper breakfast as soon as I saw an eatery. The small eatery was in the middle of the city and noticed a lot of people gathering. The city was celebrating Sinulog Festival. So I have to eat my breakfast quick to beat the traffic. At least the rain stopped.

After around 15mins, I’m back on the road. I had to drive my way around people on the road. I saw a lot of kids on their costumes. I reckon they’ll be dancing in the next few hours. I remember there was a time when I enjoyed watching this type of festivals. But today, I still have more than 6 hours to drive. 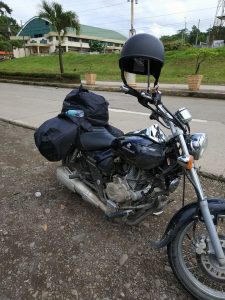 The next 3 hours was driving. I stopped a couple of times to stretch. I also stopped at Montevista to grab some snack – a couple of bread and bottled water. I checked my phone. My brother texted that his already in Tagum City – an hour and half drive away from Davao City. He texted me the previous night that he will meet me on the road from Davao City. They – I reckon that he was with his girlfriend – stopped at Jolibee to grab something to eat. It was around noon. I settled with a snack.

It was a crowded traffic but manageable. I reminded myself of speed limit though. We went to my siblings’ apartment to dropped my luggage. After which, we went to SM Ecoland to grab something to eat. It was already past 1440 hours and I started to feel hunger. We messaged my other siblings – two older sisters – to meet us up at SM.

It was a reunion of some sort. We ate, then watched a movie at the cinema after. It was already past 2000 hours when the movie ended. I asked my brother to guide me to a local inn I can stay for the night. I said goodbyes to my other siblings.

I settled in at Las Casitas Inn. It was a small in with just basic amenities but at least it has a hot shower.

It was an exhausting day but fun. Tomorrow would be a work day and I already picked a good place – co-working – to work. At last, Philippines is catching up with setting up co-working spaces.